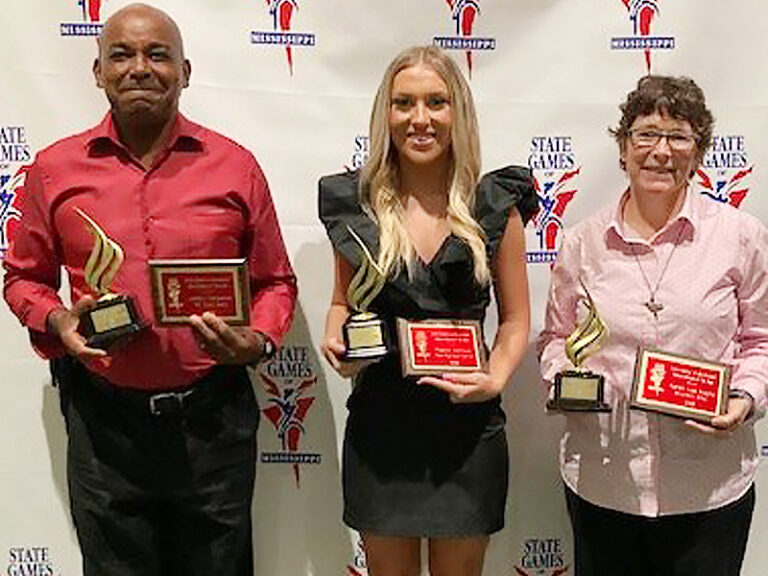 MERIDIAN, MS – Whether a father who overcame severe injuries, a mountain biker with only one month to train or a soccer player who maintains a 4.0 GPA, the three 2022 Ochsner Rush Athletes of the Year for the State Games of Mississippi all have the spirit of competition that represents athletes from across the state. 5K Road Race participant LeeRoy Carpenter (DeKalb), Mountain Biker Sarah Lea Anglin (Madison) and Soccer player Kaylee Harrison (Meridian) were named to the top slots of Male, Female and Youth Athlete of the year, respectively. 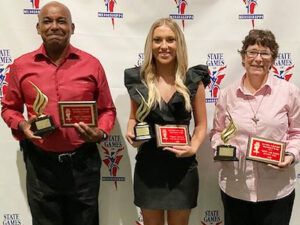 The State Games of Mississippi roared back to life in 2022 for its 31st year, with more than 5,000 competitors in 41 sports. “It has been amazing to see the levels of competition and the spirit during this year’s events,” said Missye Dozier, Executive Director of the Games. “And we are so grateful to our sponsors and volunteers as they continue to stand strong in support of everything we do for Mississippi’s amateur athletes.”

Based on the national program, the State Games of Mississippi established the annual “Athlete of the Year” award to recognize Mississippi’s amateur athletes. Coaches, officials, athletes, volunteers and spectators nominated one male and one female athlete from each of the 2022 sports for the award. The nominated athletes personify the ideals of the State Games movement, such as participation, sportsmanship, special attributes, achievements, efforts and positive attitudes. Three final winners are chosen: Male, Female and Youth Athletes of the Year.

The State Games of Mississippi also recognizes the “Volunteer of the Year.” For 2022, Jamie Smith, Meridian, took the top volunteer honor for her work with the Games since their inception 31. Jamie’s sport to volunteer for is soccer, and she knows the sport inside and out. She even served as Soccer Commissioner for the Games for many years. “She is one of our volunteers that we can call on and we know she will be ready and willing to jump right in to help,” said Dozier.

Jamie Smith, 2022 Volunteer of the Year

The 2022 State Games of Mississippi Male Athlete of the Year, LeeRoy Carpenter of DeKalb, has been participating in 5K events for five years, all the while overcoming several personal health challenges. When he was younger, he had an accident where a truck ran over him and the doctor told him he would never walk again. And in the past several years, he triumphed over a heart attack and two bouts of cancer. After his illnesses, he was inspired by his daughter to change his eating habits and exercise more, and, as he said, “this change has allowed me to feel better at my age while competing in 5K runs.” He finds great joy in running with his daughter, Latora, and this year will be his third time doing the half-marathon in Meridian. As his nomination form said, “LeeRoy always brings a smile to each event and is an inspiration to his fellow participants.”

Mountain Biker Sarah Lea Anglin from Madison has been participating in the sport for three years, during which she won a gold medal in the 2022 State Games Mountain Bike event. Sarah Lea said this year’s mountain bike course was the hardest she has ever done but was also “really fun.” She has overcome a hernia surgery repair that took her off the bike for two months and was only able to get in one week of training before her first race. Sarah Lea has many achievements outside of the State Games, as she has placed in the 2021 Gulf South Regional Mountain Bike Series, the 2022 Oak Mountain Race, the 2022 Tux Creek Tussle Race and the Tuffburg Race. She was inspired to take up Mountain Biking because of her young granddaughter. Sarah Lea and her husband had been mentors in the MS Kids Cyclocross Program when her granddaughter said, “Why don’t you race?” Sarah Lea said, “My first thought was, ‘I’m going to die!’ My second thought was, ‘I have to do this.’ These girls need to see someone out there riding and racing — giving it their best. Why not a grandmother?”

Youth soccer player Kaylee Harrison of Meridian has played on two travel teams as well as competing for her school soccer team. With all of that, she has maintained a 4.0 GPA and is taking advanced classes. Kaylee said, “This has not always been easy, but it has taught me self-discipline along the way, which is a lesson I can use throughout my life.” Kaylee scored six goals in three games during the 2022 State Games and was able to bring home a gold medal to commemorate her last year to compete as a high school player. “The State Games have been such an important part of my life over the past seven years,” she said, and she plans to volunteer for the Games next year. Kaylee has numerous achievements outside of State Games and has achieved the MHSAA 4A State Champion in Soccer beginning in 2018 through 2021. Interestingly, she started out the smallest player for her age but loved soccer so much that when she was on the field “it pushed me to give my all.”

Other nominees for the 2022 Ochsner Rush Health Athlete of the Year included:

Keith Rigdon, 15 and up Basketball – Meridian